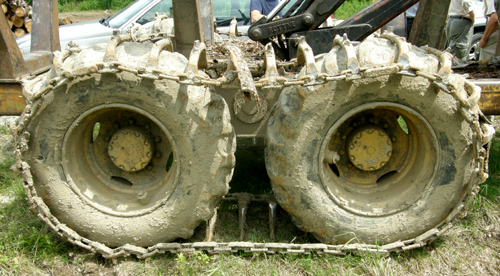 Thanks to the amiable and instructional efforts of David Brinn of Vermont Family Forests, a non profit promoting the health of our forests, an amazing ecological forestry charette was offered this morning featuring loggers Bill Torey (a 30 year veteran woodsman) & Larry Altman, another solo logger operating in Addison County. The massive chain surrounded tires above and the Dedicated Northern European Forwarder below are part of Larry's high tech, efficient operation. 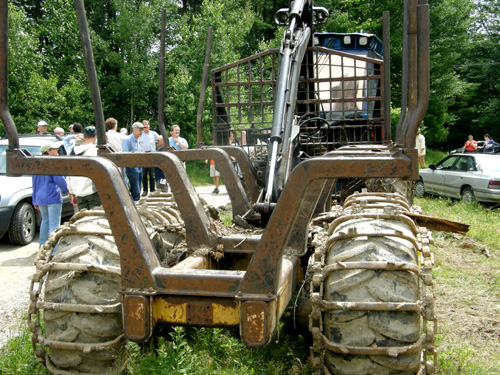 Here are some of the comments & questions that came out of this meeting of woods and mind.

With fossil fuel supplies dwindling and inflating world wide, the forests hold low hanging fruit if sensitively managed. Can we go into the Vermont forests for energy in a way that is sustainable, efficient & fair? Do we have a sustainable wood biomass? Vermont aims to double current production of 1.5 million green tons by 2025.

Harvestable woodlands exclude conserved lands & elevations above 2,500 feet and provide 75 foot buffer areas all around wetlands, as well as stream buffers. Results of the survey include 60% forested of which 52% is suitable, and 84% privately owned. While the harvest amount in Addison  averaged, in 2007, 1.7 green tons per acre, Washington County came in at 2.9 green tons per acre.

One green ton is roughly equivalent to four tenths of a cord. In Addison County with an approximate population of 10,500 and 22,000 green tons harvested per year, an average household consumes about one cord per person per year. Cost analysis bears out that a cord delivered within 8 miles of it's harvesting should cost $249.41 and slightly higher for premium heat varieties. Once cut, wood can be dried in a single season if stacked and stored properly, reaching under 20% moisture content. More slender (under 3" maximum diameter) logs & kindling are much more efficient heating fuel sources than larger pieces of wood. Wood chips, with more surface area to volume ratios and conversely higher gas productivity when burned, are taking hold in Europe but creating demand for all forest lumber and as a result having much greater impact on the health of the forest. 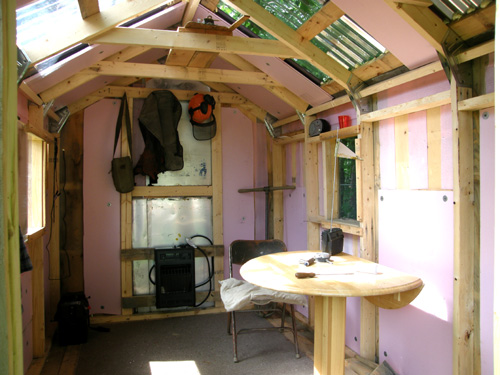 This is Bill Torey's logging shack, his refuge for breaks and meals which includes a solar panel that powers radio with insulation and skylights. He learned early on that the most accomplished woodsman had their mobile rest stations in order to spend more time on the land and be able to take cover  during inclement weather rather than heading home and cutting the day short. Many logging operations are running narrow profit margins with many going under and fewer and fewer youth learning the trade.  With his  tractor pulled frontloader below,  Bill explained it's not what you can pull (in terms of tonnage),  it's what you can stop on the way down a hill with a huge load behind you and critical reliance on good tractor brakes as the forwarder moves but doesn't brake on it's own.

Larry Altman outlined the need to be innovative as embodied by his computer powered dedicated frontloader which, while costing twice as much to maintain as less expensive and lower tech machines, allows him to get the same amount of logging done in half the time: " With a conventional operation you're dying on the vine". 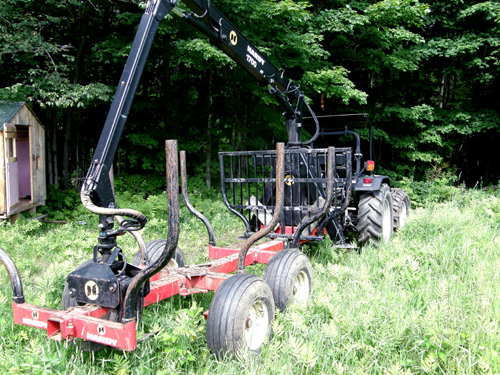 Vermont's logging industry is relatively unregulated save a restriction on clear cutting over 40 acres,  requiring a permit.