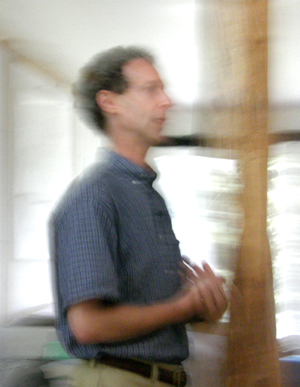 Dan Reicher of google.org spoke this evening at Yestermorrow's Design Build School amidst a huge turnout.

The future is not what it used to be. There's a huge opportunity around this marked grid.  The rise of plug in vehicles. Lord Kelvin: "If you can't measure it you can't improve it."  1972 refrigerators ran 2000 kilowatts per year, now not more than 450 kilowatt hours. China! The Chinese recently announced they're going to install 250 million smart meters. Emerging world of plug in vehicles, Toyota Priuses and Ford Escapes, replaced standard batteries with larger batteries and tested these modified vehicles with Google employees. So many exciting things going on. Larry Page & Sergey Brin two founders of  Google. Not only can cars charge from the grid, but they can send electricity back to the grid. Lots of very sophisticated things you can do with vehicles that plug into the grid. Even after market vehicles could have very significant efficiency improvements. Google has 8 buildings with solar roofs. Lots and lots of data collection.  L5 Lithium Power.  Google employees juiced over 73 mpg from modified Prius. Average drivers juiced 93.5 mpg from plug in hybrid. Imagine what we could do if we built the plug ins from the ground up? One fundamental challenge of renewable challenge: how to compete with coal?Now they can't. 4-6 cents a kilowatt hour for coal. Photo voltaics well over 18 cents a kilowatt hour.

Renewable Energy < Coal.  Aim: renewable energy cheaper than coal. Now doing R&D at universities and some labs. Series of investments in break through tech companies. Enhanced Geo Thermal Systems (EGS). If you drill deep enough, anywhere, you get to hot rock. If bring the water up to the surface, you can generate steam generated electricity. Less than 4 cents per kilowatt hour, but still a relatively immature technology. Lots of interest and government dollars being spent.  But, does this technology cause earthquakes & seismicity? Google thinks it was unfairly critiqued in the NY Times.

Are a few projects in France & Germany up and running, 5 or 6 kilometers deep, not any more than the oil and gas industry is drilling in a lot of their projects.

What is Google up to? Using a jet engine in reverse to try to melt rock, to dramatically reduce drilling cost. If you go to 10k deep you can do this coast to coast, if we can crack the code on how to get this deep. Nevada is a huge resource. Texas is the Saudia Arabia of geo-thermal. In last few months, oil and gas industry has just caught on that they know how to drill. When drill for natural gas they get lots of hot water.  Even in Maine some serious opportunity.

Plug in vehicles, renewable energy and the Smart Grid.

Whether these plug in vehicles could in fact be part of the answer to this. What if you could turn off the charging  of 100,000 vehicles, cycle the charging? It has some real advantages in places like CA where the wind blows at night rather than in the day when we need it. Google calls this smart charging. Have engineers writing computer code on how to do this with millions of vehicles. Seems to be working.

What if there is serious government investment in these alternative forms of energy?

Dan had honor of serving on the Obama transition team, helped figure out how to spend billions of dollars in stimulus money.  Fifty  billion dollars, huge money. R&D, tax credits, focus grants, many agencies spending this money in a tight time frame, how to spend it wisely. Some of the audience in the hunt for this money. If you're in the hunt: Got to have near term economic impact. States are in control of a lot of this money. Will be transparency, will owe a lot of info on how it's spent. Delays are inevitable.

Most of exciting technologies, top companies outside of US except for wind turbines. Japan, Germany, China, Korea reign. Piece of legislation could give a real boost to US Technologies.

"This is not a static process." Senator John Kerry.

The best way to predict the future is to invent it.

The nuclear question is always the interesting one. Nuclear energy is carbon free.  Now  nuclear accounts for 20% of US energy. There's some big money going towards it. It's a hot debate. We sort of neglect one aspect of it: with one accident you can set back the entire industry. What about another accident, what would that mean? A redoubled effort around safety. The next few reactors to get built will be make or break for the industry.

Connect to maplesweet.com call 800-525-7965 or e-mail info@maplesweet.com for the latest real estate information and Vermont property offerings, or to list your own Vermont house, condo, land or commercial property.