Share
This article comes directly from the Free Dictionary, by Farlex: https://encyclopedia.thefreedictionary.com/Yurt 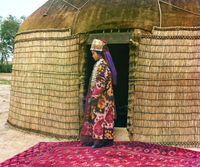 Turkmen woman at the entrance to a yurt inTurkestan; 1913 picture by Prokudin-Gorskii
A yurt (üi or kiz üi in Kazakh, ger in Mongolian) is a portable, felt-covered, wood lattice-framed dwelling structure traditionally used by nomads mostly known as mongolians in the steppes of Central Asia. A yurt is more home-like than a tent in shape and build, with thicker walls

A yurt (üi or kiz üi in Kazakh, ger in Mongolian) is a portable, felt-covered, wood lattice-framed dwelling structure traditionally used by nomads mostly known as mongolians in the steppes of Central Asia. A yurt is more home-like than a tent in shape and build, with thicker walls. 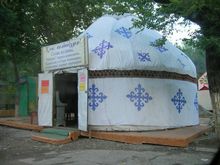 A yurt in Shymkent, Kazakhstan, used as a café.

The word yurt is originally from a Turkic word referring to the imprint left in the ground by a moved yurt, and by extension, sometimes a person's homeland, kinsmen, or feudal appanage. The term came to be used in reference to the physical tent-like dwellings only in other languages. In modern Turkish the word "yurt" is used as the synonym of homeland. In Russian the structure is called "yurta" (????), whence the word came into English.

Traditional yurts consist of a circular wooden frame carrying a felt cover. The felt is made from the wool of the flocks of sheep that accompany the pastoralists. The timber to make the external structure is not to be found on the treeless steppes, and must be obtained by trade in the valleys below.

The frame consists of one or more lattice wall-sections, a door-frame, roof poles and a crown. Some styles of yurt have one or more columns to support the crown. The (self-supporting) wood frame is covered with pieces of felt. Depending on availability, the felt is additionally covered with canvas and/or sun-covers. The frame is held together with one or more ropes or ribbons. The structure is kept under compression by the weight of the covers, sometimes supplemented by a heavy weight hung from the center of the roof. They vary regionally, with straight or bent roof-poles, different sizes, and relative weight.

A yurt is designed to be dismantled and the parts carried on camels or yaks to be rebuilt on another site.

The wooden crown of the yurt (Mongolian: ?????, [t?:n]; Kazakh: ???????[????r??q]; Kyrgyz: ?????? [tyndýk]; Turkmen: tüýnük) is itself emblematic in many Central Asian cultures. In old Kazakh communities, the yurt itself would often be repaired and rebuilt, but the shangrak would remain intact, passed from father to son upon the father's death. A family's length of heritage could be measured by the accumulation of stains on the shangrak from decades of smoke passing through it. A stylized version of the crown is in the center of the coat of arms of Kazakhstan, and forms the main image on the flag of Kyrgyzstan.

Today the yurt is seen as a nationalistic symbol among many Central Asian groups, and as such, yurts may be used as cafés (especially those specialising in traditional food), museums (especially relating to national culture), and souvenir shops.

Buddhist symbolism in the Mongolian yurts 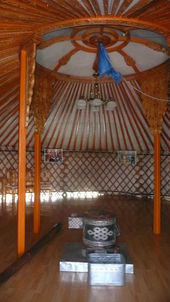 The design of the Mongolian yurt developed from its ancient simple forms to actively integrate with Buddhist culture. The crown--toono adopted the shape of Dharmachakra. The earlier style of toono, nowadays more readily found in Central Asian yurts, is called in Mongolia "sarkhinag toono" while the toono representing Buddhist dharmachakra is called "khorlo" (Tibetan ????????) toono. Also the shapes, colours and ornaments of the wooden elements--toono, pillars and poles of the Mongolian yurt are in accord with the artistic style found in Buddhist monasteries of Mongolia. Such yurts are called "uyangiin ger" -- literally meaning "yurt of lyrics" or "yurt of melodies". 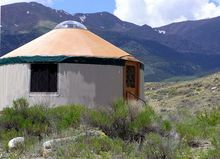 A yurt-derived structure in the Colorado mountains

Enthusiasts in other countries have taken the visual idea of the yurt--a round, semi-permanent tent--and have adapted it to their cultural needs. Although those structures may be copied to some extent from the originals found in Central Asia, they often have some different features in their design that adapt them to different climate and use.

In the United States and Canada, yurts are made using hi-tech materials. They are highly engineered and built for extreme weather conditions. In addition, erecting one can take days and they are not intended to be moved often. These North American yurts are better named yurt derivations, as they are no longer round felt homes that are easy to mount, dismount and transport. North American yurts and yurt derivations were pioneered by William Coperthwaite in the 1960s, after he was inspired to build them by an article about Supreme Court Justice William O. Douglas' visit to Mongolia.[1]

In 1978, Oregon-based company Pacific Yurts became the first to manufacture yurts using architectural fabrics and structural engineering, paving the way for yurts to become popular attractions at ski resorts and campgrounds.[2] In 1993, Oregon became the first state to incorporate yurts into its Parks Department as year round camping facilities. Since then, at least 17 other US States have introduced yurt camping into their own parks departments.[3]

In Europe, a closer approximation to the Mongolian and Central Asian yurt is in production in several countries. These tents use local hardwood, and often are adapted for a wetter climate with steeper roof profiles and waterproof canvas. In essence they are yurts, but some lack the felt cover that is present in traditional yurt.

Different groups and individuals use yurts for a variety of purposes, from full-time housing to school rooms. In some provincial parks in Canada, and state parks in several US states, permanent yurts are available for camping.

Connect to maplesweet.com, e-mail info@maplesweet.com or call toll-free 1-800-525-7965 to consider building a yurt in Vermont, list your property, arrange for showings, or look further into Vermont's real estate market.

See all Maple Sweet Real Estate listings,   the newest central & northern Vermont mls listings,  or connect to a hand picked selection of central & northern Vermont properties.
.....
Thank you for connecting to Maple Sweet Real Estate's blog, Light Amber.
.....
Vermont Required Consumer Information Disclosure: please note Vermont  real estate agencies represent Sellers directly or indirectly by default. Buyer representation can be gained for properties not already listed by Maple Sweet Real Estate. To better understand the merits of or arrange for buyer representation, please email or call for further details.
.....
If your property is already listed for sale with another real estate agency, this is not intended as a solicitation of that agency's listing.