Quantitative Easing: Does It Work? Text by Lisa Smith for Investopedia

If there were awards for the most controversial investment terms, "quantitative easing" (QE) would win top prize. Experts disagree on nearly everything about the term - its meaning, its history of implementation, and its effectiveness as amonetary policy tool.

The U.S. Federal Reserve and the Bank of England have used QE to weather financial crises. In fact, the U.S. has had three iterations: QE, QE2, and QE3. TheEuropean Central Bank (ECB), meanwhile, is prohibited by E.U. law from using QE. But that may have to change, some signs indicate. On April 3, 2014, at a press conference in Frankfurt, ECB chair Mario Draghi made the controversial, but not unexpected announcement that the bank could not rule out QE as a method for fighting the malaise of persistent deflation in the eurozone. Desperate times, desperate measures. So what's the big deal about QE - and does it work?

The Basics Popular media's definition of quantitative easing focuses on the concept of central banks increasing the size of their balance sheets to increase the amount of credit available to borrowers. To make that happen, a central bank issues new money (essentially creating it from nothing) and uses it to purchase assets from other banks. Ideally, the cash the banks receive for the assets can then be loaned to borrowers. The idea is that by making it easier to obtain loans, interest rates will drop and consumers and businesses will borrow and spend. Theoretically, the increased spending results in increased consumption, which increases the demand for goods and services, fosters job creation and, ultimately, creates economic vitality. While this chain of events appears to be a straightforward process, remember that this is a simple explanation of a complex topic. (For a closer look at how they print money and seek to control inflation, check out The Fed's New Tools For Manipulating The Economy.) 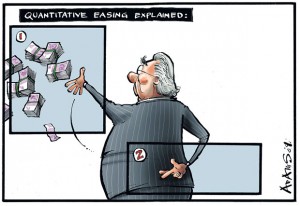 The Challenges Closer analysis of QE reveals just how complex the term is. Ben Bernanke, renowned monetary policy expert and chairman of the Federal Reserve, draws a sharp distinction between quantitative easing and credit easing: "Credit easing resembles quantitative easing in one respect: It involves expansion of the central bank's balance sheet. However, in a pure QE regime, the focus of policy is the quantity of bank reserves, which are liabilities of the central bank; the composition of loans and securities on the asset side of the central bank's balance sheet is incidental." Bernanke also points out that credit easing focuses on "the mix of loans and securities" held by a central bank.

Despite the semantics, even Bernanke admits that the difference in the two approaches "does not reflect any doctrinal disagreement." Economists and the media have largely disregarded the distinction by dubbing any effort by a central bank to purchase assets and inflate its balance sheet as quantitative easing. This leads to more disagreements. (For more read The Federal Reserve's Fight Against Recession.)

Does Quantitative Easing Work? Whether quantitative easing works is a subject of considerable debate. There are several notable historically examples of central banks increasing the money supply. This process is often referred to as "printing money", even though it's done by electronically crediting bank accounts and it doesn't involve printing.

In 2001-2006, the Bank of Japan increased its reserves from 5 trillion yen to 25 trillion yen. Most experts view the effort as a failure. But again, there is debate over whether or not Japan's effort can be categorized as quantitative easing at all.

Economic efforts in the United States and the United Kingdom during 2009-10 also met with disagreement over definitions and effectiveness. European Union countries are not permitted to engage in quantitative easing on a country-by-country basis, as each country shares a common currency and must defer to the central bank. 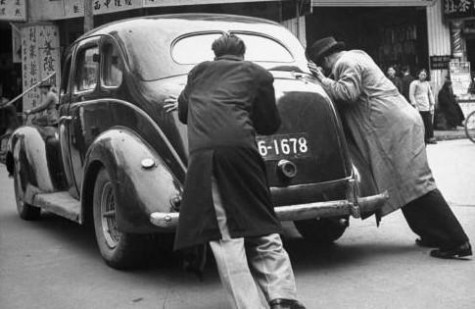 There is also an argument that QE has psychological value. Experts can generally agree that quantitative easing is a last resort for desperate policy makers. When interest rates are near zero but the economy remains stalled, the public expects the government to take action. Quantitative easing, even if it doesn't work, shows action and concern on the part of policy makers. Even if they cannot fix the situation, they can at least demonstrate activity, which can provide a psychological boost to investors. Of course, by purchasing assets, the central bank is spending the money it has created, and this introduces risk. For example, the purchase of mortgage-backed securities runs the risk of default. It also raises questions about what will happen when the central bank sells the assets, which will take cash out of circulation and tighten the money supply. (For more on this, check out When The Federal Reserve Intervenes (And Why).)

When Was Quantitative Easing Invented?

Even the invention of quantitative easing is shrouded in controversy. Some give credit to economist John Maynard Keynes for developing the concept; some cite the Bank of Japan for implementing it; others cite economist Richard Werner, who coined the term.

The Bottom Line The controversy surrounding QE bring to mind Winston Churchill's famous quip about "a riddle wrapped in a mystery inside an enigma". Of course, some expert will almost certainly disagree with this characterization.

Connect to maplesweet.com, e-mail info@maplesweet.com or call toll-free 1-800-525-7965 to find out more about market influence and updates, to list or buy property in Vermont, or with any inquiries.